Proteins are the biological nano-machines that are necessary for all life on Earth. Whereas the range of functions for naturally occurring proteins is very broad, there are limits to the range observed in Nature, since proteins evolved for the sole purpose of ensuring survival of their host species. Fortunately, some natural proteins also happen to be very useful tools for research, medical, and industrial applications. Our research is focused on making them even better! By mimicking the process of evolution in the laboratory, we develop proteins that are more useful tools than their natural versions.

To date, the Campbell lab has mainly focused on engineering of fluorescent proteins. Fluorescent proteins are colorful “glowing” proteins that are found in jellyfish, sea anemone, and reef corals. These proteins have the unique ability to generate a visibly-fluorescent chromophore within their structure. The DNA that encodes a fluorescent protein can be introduced into practically any animal and be expressed using the animal’s own cellular machinery, making the tissues of the animal fluorescent. Genetically encoded fluorescence has revolutionized many areas of biology because it enables researchers to use fluorescence microscopy to “see” structures and cellular processes that would normally be invisible.

Cutting edge research in the Campbell lab involves converting fluorescent proteins into dynamic indicators that change their fluorescence intensity or color in response to a specific biochemical change. We have a particular focus on broadening the spectrum of available colors and pushing them to ever redder wavelengths. Tissue is most transparent at near-infrared wavelengths, so red-shifted indicators can let us see deeper into tissue.

The followings are highlights of our past achievements and ongoing directions. 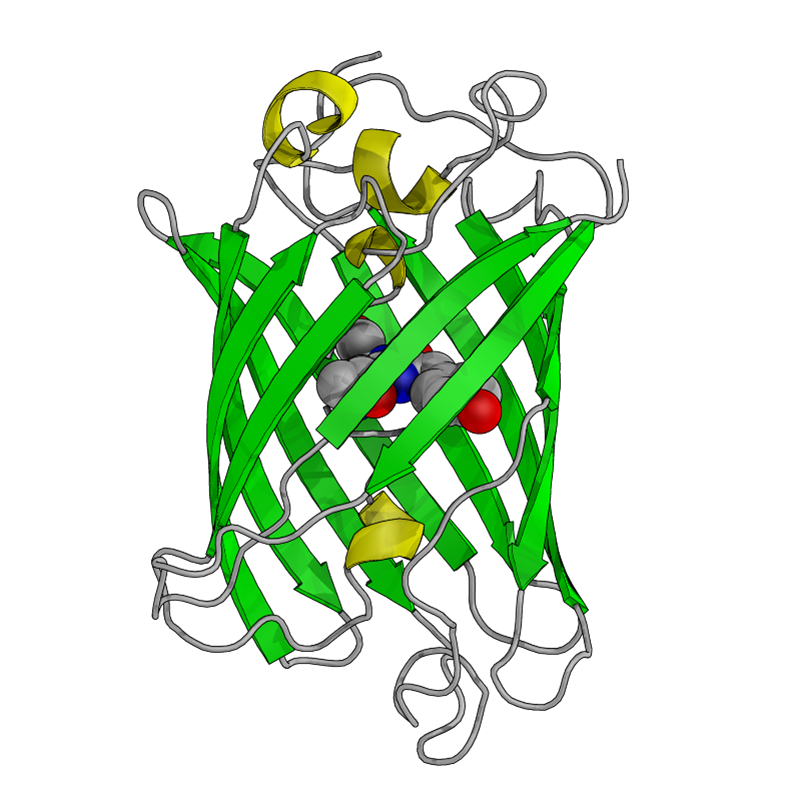 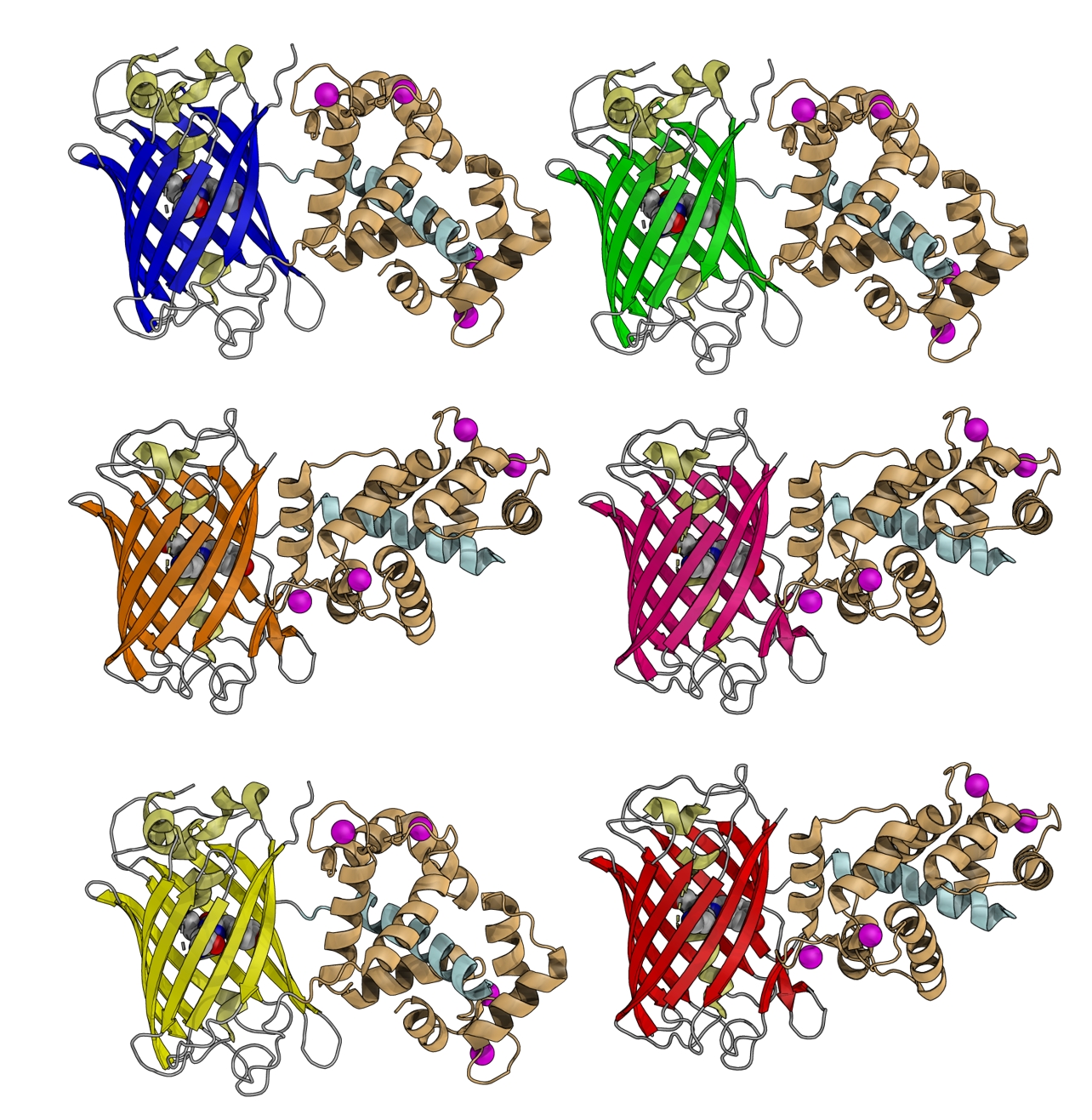 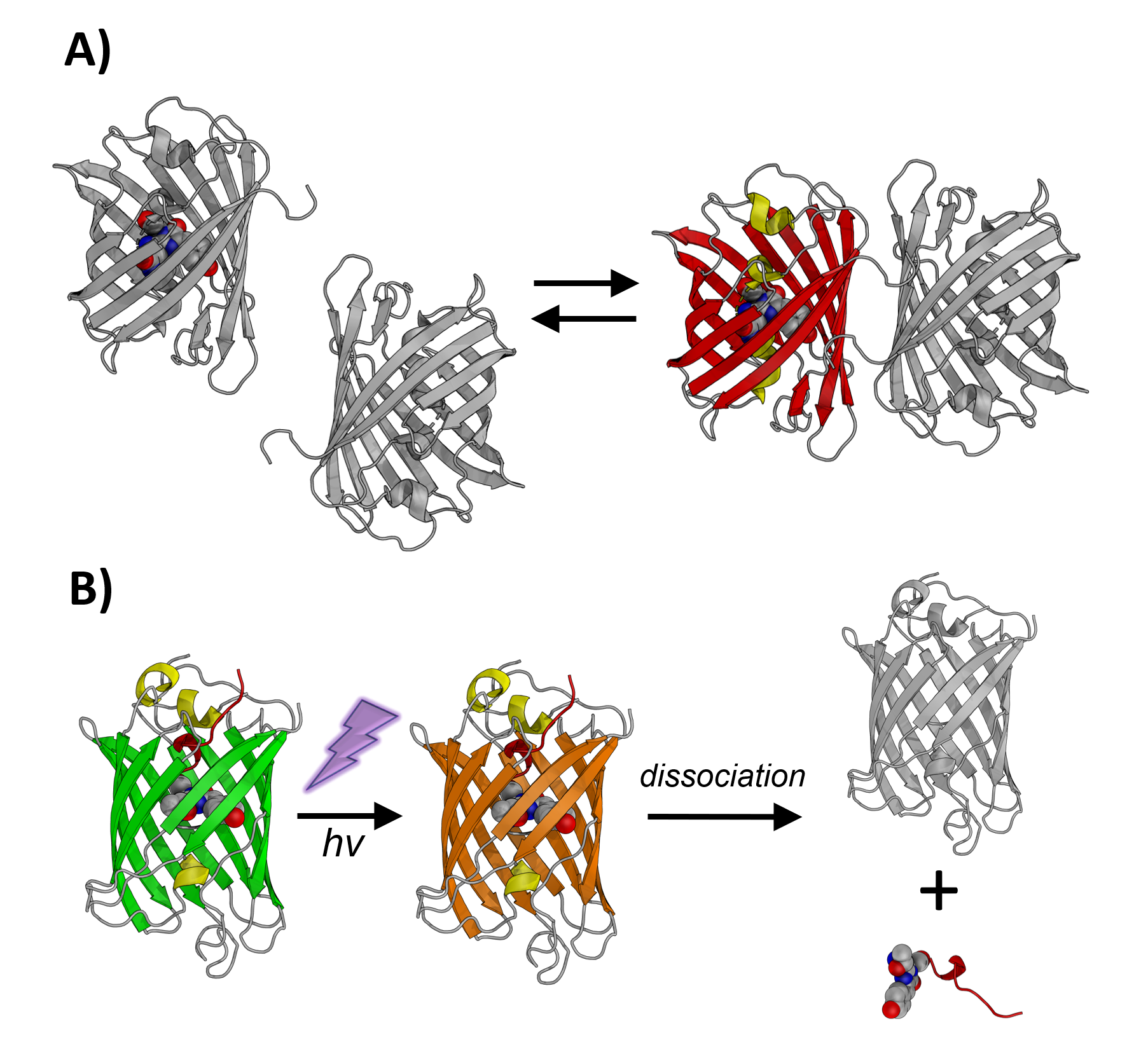 The Campbell lab has expanded the toolbox of coral-derived fluorescent protein variants for use in a wide variety of application areas. For example, we developed cyan, yellow, and green-to-red photoconvertible fluorescent proteins. These new fluorescent proteins enabled a number of new applications including simultaneous imaging of multiple biological processes in single cells and improved super-resolution imaging. In later work, we developed dimerization-dependent fluorescent proteins (ddFPs) that increase their brightness when they form a heterodimeric complex. This innovative technology provided a powerful new approach for detecting protein-protein interactions in live cell. Recently, the Campbell lab developed a photocleavable protein (PhoCl) as a fundamentally new class of optogenetic tool to control protein function with light. First and second generation PhoCl variants can be used for light-activated transcription, gene recombination, manipulation of protein localization, and activation of enzyme activity. 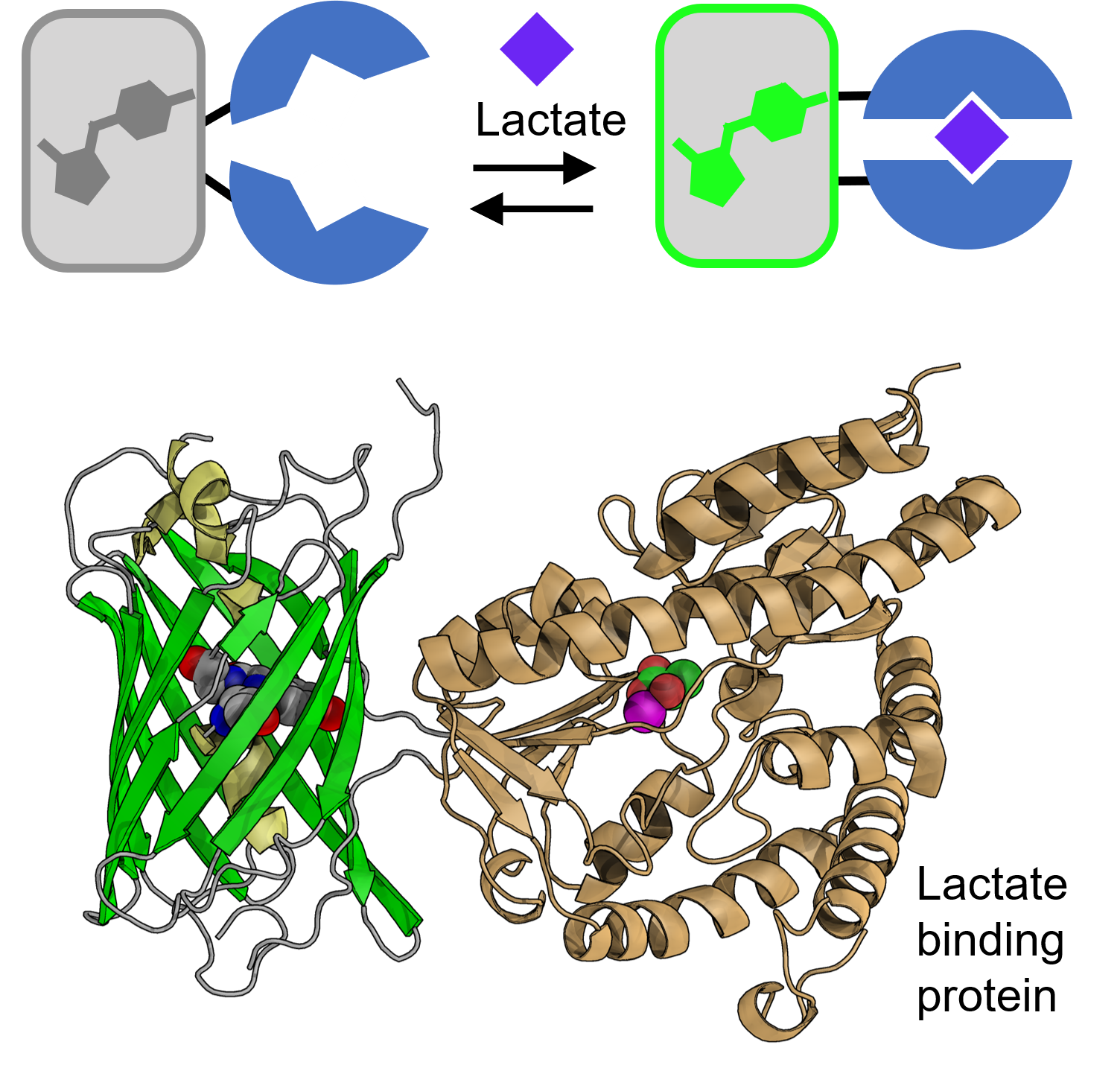 Schematic and 3D structural representations of our lactate sensor (in collaboration with Dr. M. Joanne Lemieux and Dr. Yurong Wen, University of Alberta)

Investigating the role of biological energy usage in disease

Many diseases have causes related to changes in the way cells access or use biological energy sources. One important example is neurodegenerative diseases that are associated with changes in brain energy metabolism and, specifically, the availability of lactate. Unfortunately, we currently lack tools for multiparameter visualization of the full metabolism of a cell, and so we cannot visualize the extent to which a single cell is using each of the fundamental metabolic pathways for accessing and using biological energy. The Campbell lab is developing high performance indicators for cell metabolic pathways and enable the full metabolism of a cell to be visualized for the first time! 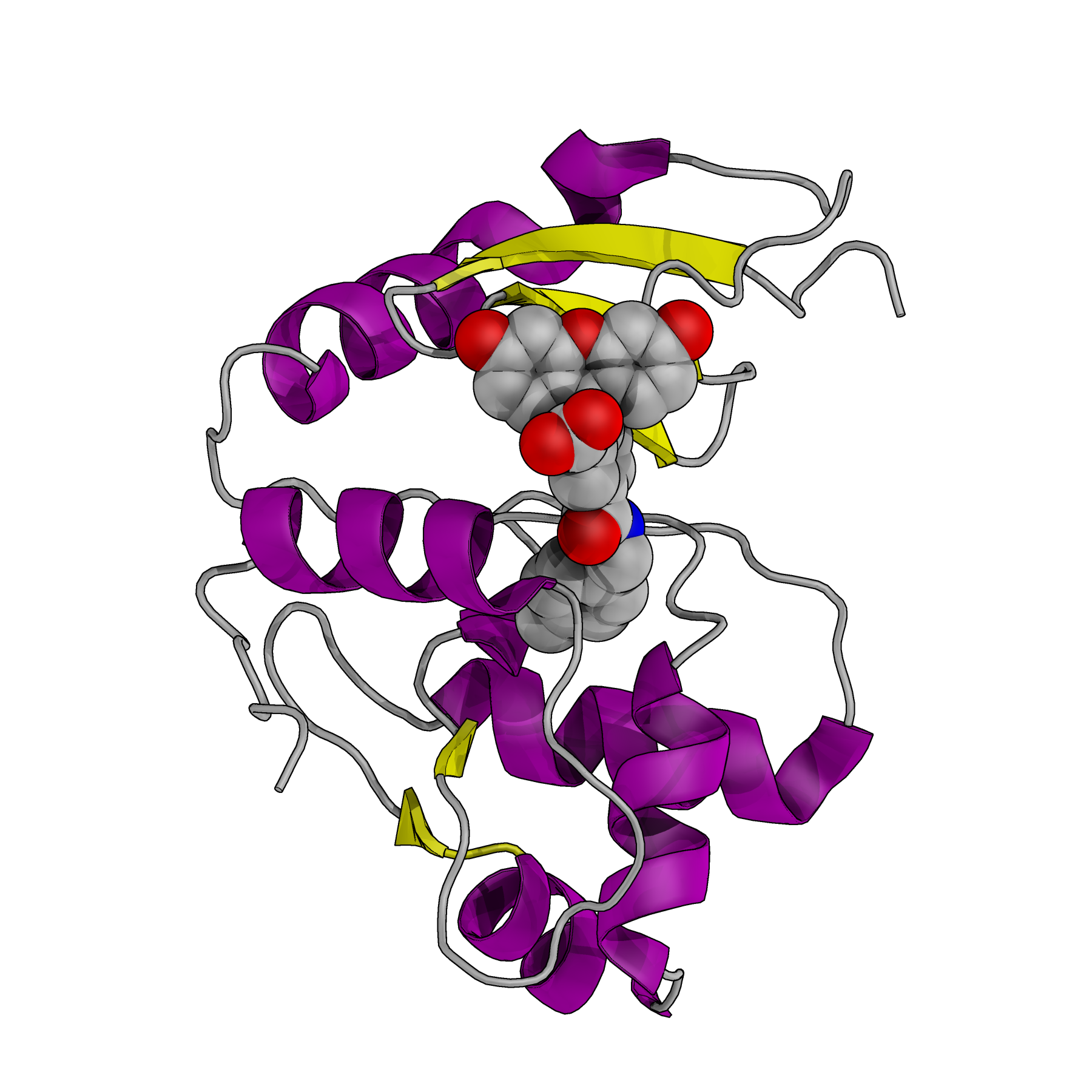 Example of chemi-genetic fluorescent protein, where a synthetic dye (space-filling model) is attached to a tag protein (PDB: 6GA0)